Alan is a dynamic and engaging speaker with a talent for making serious topics playful, and turning play into serious impact.

He is a very dynamic man, a world leader in the field of gifted coaching and in the understanding of both gifted children and adults alike.

– Tony, an audience member at the 2017 Perth seminar

Alan has a wealth of knowledge and experience working with families of Gifted Children. His friendly manner made his audience feel comfortable asking questions. We were grateful to have him share his message about the importance of combining IQ with persistence and resilience.

You were the best out of all the speakers in the whole conference… You look like you really enjoy it… I’d read the national report already, but you really brought it to life; I learnt some new things!

– Audience member at the 2016 National Conference on Giftedness

Sitting through eight hours of other speakers was worth it, just to hear you speak at the end of the day. Your way of presenting brilliance and high performance is fantastic!

– Sonja, an audience member at the 2015 International Conference on Giftedness and Talent Development

Alan presents seminars and workshops at many state, national, and international conferences. He also runs programs for schools, including teacher professional development. Each topic can be delivered as a 2-hour stand-alone presentation, workshop (if appropriate), or a keynote address (60 minutes).

Please get in contact if you have an upcoming conference or workshop you’d like Alan to be a part of.

31 July-8 August, 2021 The World Council for Gifted and Talented Children: Developing The Future Of Gifted Education (Virtual).
The new irrelevance of intelligence (co-presented with Leta, an AI powered by GPT-3).

Dara School (Australia’s first and only fully gifted school) – Student seminars. What would your life look like if you were ten times more confident? (Adelaide, Australia)

5 May, 2018 Dara School (Australia’s first and only fully gifted school) – Student seminars. What would your life look like if you were ten times more confident? (Adelaide, Australia)

8 May, 2017 Bright and powerful: Finding the light in high-ability (Sacred Heart College, Perth)

22 April, 2017 Who am I? (VIA Character strengths for families) Private workshop for Mensa WA children 7yo-17yo + parents (Perth, Australia)

22-24 July, 2016 SENG (Supporting Emotional Needs of the Gifted) GIFTED: Our Past and Our Future (Colonial Williamsburg, Virginia, USA)

Beyond 2030: gifted education An overview of the world’s most advanced gifted schools.

Positive Education. Findings and practical application of the latest research.

Being vs doing. Self-care for teachers.

Superpowers. Key traits of high performers, what they need, and how they thrive.

Bright to brilliant. Internal brightness must be nurtured to shine brilliantly. An eye- opening talk for parents and teachers, and anyone who works with bright children.

Promoting passionate persistence. “Persistence matters twice as much as IQ”. By multiplying existing skill, talents, and knowledge, students are encouraged to thrive.

Confidence: More compelling than smarts. Building self-esteem at an early age is vital in allowing children to flourish. Hear theory and practice of this urgent trait.

For students and children

Lego Serious Play. Workshop-style presentation for small groups. Derived from a consulting process commissioned by Lego themselves, and created by Swiss Professors. 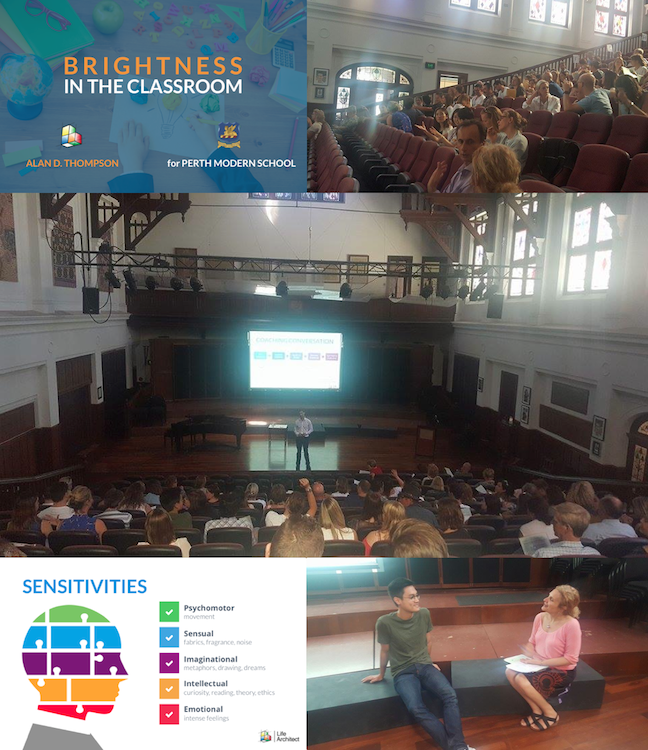 A full press kit is available here for media and conference organisers.